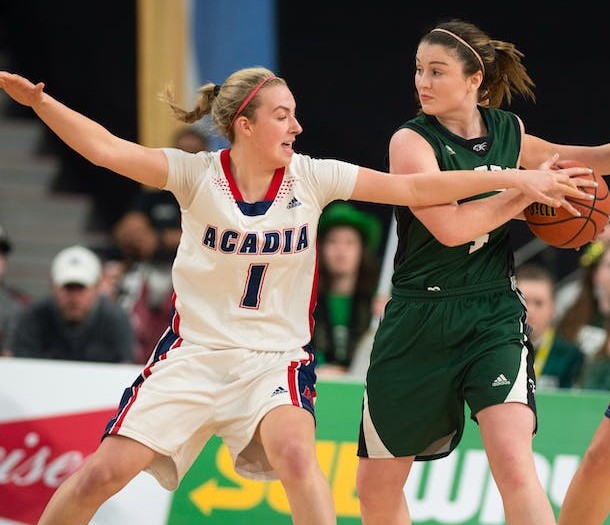 Ellen Hatt has had a busy fall.

The Fall River, NS, product was working with Sports and Entertainment Atlantic, when opportunity knocked in Fredericton.

She is now studying law at the University of New Brunswick in Fredericton and, despite a hectic schedule with the books, a fifth year of USPORTS eligibility was in her hip pocket.

UNB Reds’ head coach Jeff Speedy noticed and Hatt is back in the Atlantic University Sport women’s basketball conference after thinking her USPORTS career was over.

She was part of a strong program with Acadia University Axewomen, playing four seasons in Wolfville where she appeared in 92 games, averaging 17.1 minutes per outing and 6.0 points per season.

After moving to Fredericton, she joined the TRL Solutions Fredericton Women’s Basketball League, where she sat second in scoring with 18.6 points per game, second to only former AUS rival Eva Tumwine’s 22.2 points. Hatt and Tumwine played against each other at the AUS and MWBA levels. Tumwine played with the Fredericton Freeze.

Hatt practiced with UNB for a few weeks before joining the team late in the first half of the season, appearing in two games.

She averaged six points in 6.5 minutes of play as Speedy eased her back into the AUS fray.

Hatt has plenty of MWBA players with her on the Reds including Thunder teammates Jayda Veinot and Marley Curwin. UNB’s Katie McAffee and Kylee Speedy were with the Freeze. Hatt and Veinot also played together at Acadia.

Hatt is the second player from the MWBA to resume her AUS career.

Karla Yepez returned to the University of Prince Edward Island Panthers after finishing four years of play. She last played two seasons ago with UPEI, but played in the MWBA with the Windsor Edge last season.

UNB is on its first semester break, but the MWBA looks forward to watching players return for the second half stretch run at both AUS and Canadian Collegiate Athletic Association levels.