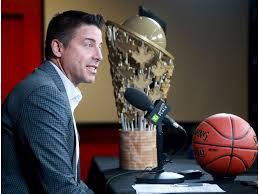 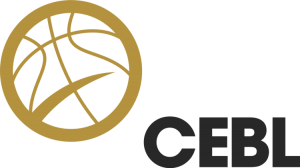 Ya got that right.

You could’ve filled a room with them.

Thoughts of giving up during the process of starting a brand new league?

The commissioner of the blossoming Canadian Elite Basketball League, a men’s professional circuit that has seven teams from Ontario to British Columbia, Morreale has his fair share of stories when it comes to the work involved with starting a league from scratch.

The Maritime Women’s Basketball Association, set to begin play in the spring of 2022, has reached out to Morreale on numerous occasions.

His commitment to helping the MWBA has been a tremendous boost for those working behind the scenes.

‘We launched and no one knew anything about us because pro leagues had come and gone before the CEBL, so it was hard for anyone to take us serious,’ said Morreale, a star athlete at McMaster University in Hamilton, who spent 12 seasons in the Canadian Football League. ‘The naysayers were everywhere. You had to be prepared and show people why this was different and why this will be successful. It takes a lot of pre-planning to create a vision and there has to be a goal in mind. The MWBA needs to ensure it has structure and solid people who want to make this work. Other key components will fall in place when that happens.’

One enormous difference between the two leagues is the professional mantra the CEBL hangs its hat on. Ticket sales are a huge priority to cover operations, travel, facilities, accommodations and, of course, player salaries.

The MWBA is not a professional league  – although it anticipates several players who play professionally in Europe will suit up in the league during their off-season – meaning ticket sales are not imperative to ensure successful operations.

That doesn’t mean the MWBA anticipates playing in empty gymnasiums.

Tasia McKenna of Halifax is the MWBA commissioner. Morreale offered her some advice for handling the reins.

‘As a commissioner, you have to make a lot of calls, a lot of connections and find like-minded people, but those who will also see a different side of planning,’ he said. ‘Pay attention to detail and governance. Communication and expectation are huge. Everything the MWBA is going to do has to be done with a purpose and with a reason. League branding is critical.’

The MWBA started to come to life in the spring of 2020.

Careful planning, conversations and finding personnel accelerated during the summer and early fall and numerous key positions are filled.

‘People will want to know what the MWBA is and that’s from potential fans, media, sponsors and most importantly, the players,’ he said. ‘People need to understand the mission so the MWBA needs to expose what it stands for and what it’s all about. The league brand is the most important thing to understand. Some 80 per cent of what we did initially was all about the league brand. Then you start to lay roots in the markets. You pass the torch on to the teams at the local level.’

It may sound like a simple acknowledgement, but Morreale said the key to the MWBA – just like it was for the CEBL – is the assets.

‘Players are your major partners and they have to buy in,’ he said. ‘When you’re starting something like the MWBA, players will sit back at first. They all talk amongst their peers. But they are the key to growing the game.’

Morreale said the CEBL held an open showcase for players prior to the first game ever being played in the pro circuit. The league’s second season was a challenge with COVID-19, but it pulled off a remarkable summer championship weekend that was lauded by many for its impact in keeping the league alive.

He said the vast majority – if not all – of those players who showed up for that initial showcase, never wore a CEBL uniform, but the word got out there was a league starting.

‘The MWBA will be different in that you have closer proximity in terms of Maritime geography and most players are going to play for teams that are close to them, so that is great news,’ he said. ‘You will find some players will take a wait and see approach and maybe not play that first year. We saw a tremendous difference in player talent from the first year to second year. It simply increased and the MWBA will see that happen. It’s about baby steps.’

Morreale played for the Toronto Argonauts and Hamilton Tiger-Cats during a successful CFL career, winning two Grey Cups. He was director of marketing for the CFL Players Association and then spent two years as president of that body.

As commissioner of CEBL, he has successfully managed player relationships with USPORTS and landed a three-year contract to broadcast games with CBC.

The CEBL was created by Canadians for Canadians, boasting the highest percentage of Canadian players of any professional league in the country. Some 80 per cent of its rosters are Canadian.

Players come from the NBA G-League, top international leagues, the Canadian National Team program, and top NCAA programs as well as from U SPORTS. The only First Division Professional League partner of Canada Basketball, the CEBL season typically runs from May through August.

Morreale’s willingness to help the MWBA is also another strong example of the Canadian basketball community lending a helping hand.